What tech generation is this?

Let’s start with an anecdote: For travel-related reasons I recently went and got some shots, as you do. This was done at my doctor’s office, by her assistant who is a certified nurse, obviously, and since I called ahead and just needed two pricks with a needle, this was definitely on the simple end of healthcare interactions.

Sure enough, the meaty part of the consultation lasted all of two minutes. The whole of it, however, took almost 20 minutes, and most of that time was filled by the nurse clicking her mouse and muttering what I presume was obscenities under her breath. 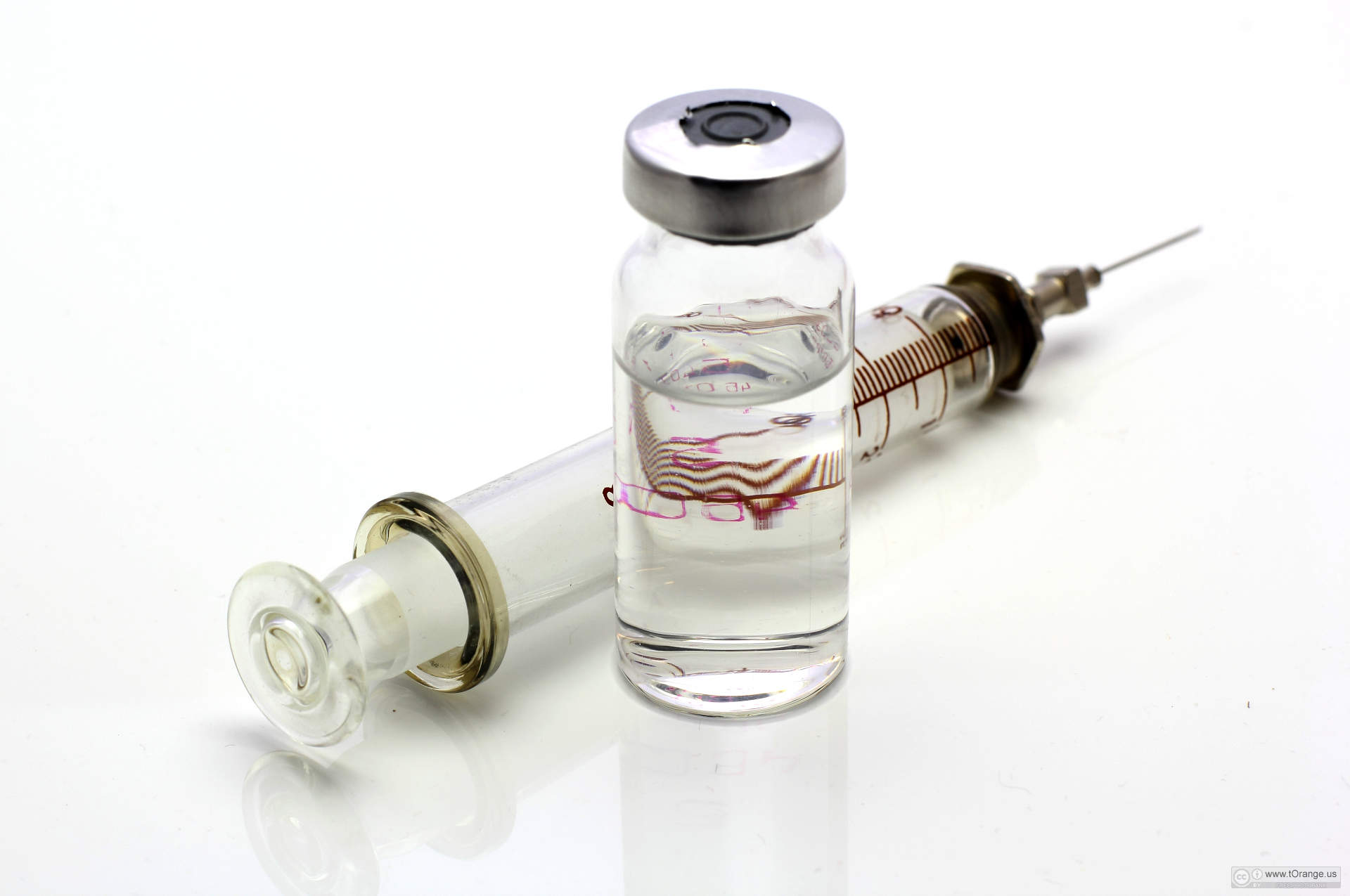 this is doctor hardware – and also, by some estimates, the least painful part of a consultation

See, doctors today – here in Denmark, anyway – have something called e-journals, because we live in a digital age, and this should come to the benefit of the healthcare system. Hey, journals used to be folders full of paper, and aren’t those perfect for transferring into bits and bytes, making them searchable, shareable across providers etc.?

But just finding out which letter combination code had to be entered for “stuck dude in the arm with needle filled with [stuff]” took several tries and two trips to ask colleagues for help, entering it into the e-journal correctly so that it would show up later (huh?) was also a hassle, apparently, and of course setting the e-journal up to remind me, or even the doctor, to schedule a follow-up might be possible, but not to my GP. I’m not going to name the software company but they advertise “user-friendly” on their website – as a professional in that field, I beg to differ, as does my cursing healthcare provider.

OK, other anecdote: A social media friend recently shared her amazement that her smartphone, just that morning, had given her a traffic update for a place she didn’t tell it she needed to go later in the day – basically it predicted her needs accurately based on her previous use, behavior etc. Holy crap, that’s… a little creepy, actually (she also thought so) but crazy convenient, and very impressive.

So, to recap: A piece of life-and-death software is apparently a first-generation database frontend that literally does zero percent of the work for you, while a regular consumer-grade smartphone is basically HAL-9000 in your purse.

I have more anecdotes, both from people working for the government or municipality, and from the private sector (“first-generation database frontend” largely describes the crazy expensive and, inexplicably, widely spread Microsoft NAV administration system, not to mention SAP, the UX of both seeming like a creative form of punishment for not being a software engineer) – but my question is this: Why are we still so bad at creating user value with certain types of professional-grade software, while end-users get new propositions for value all the time? 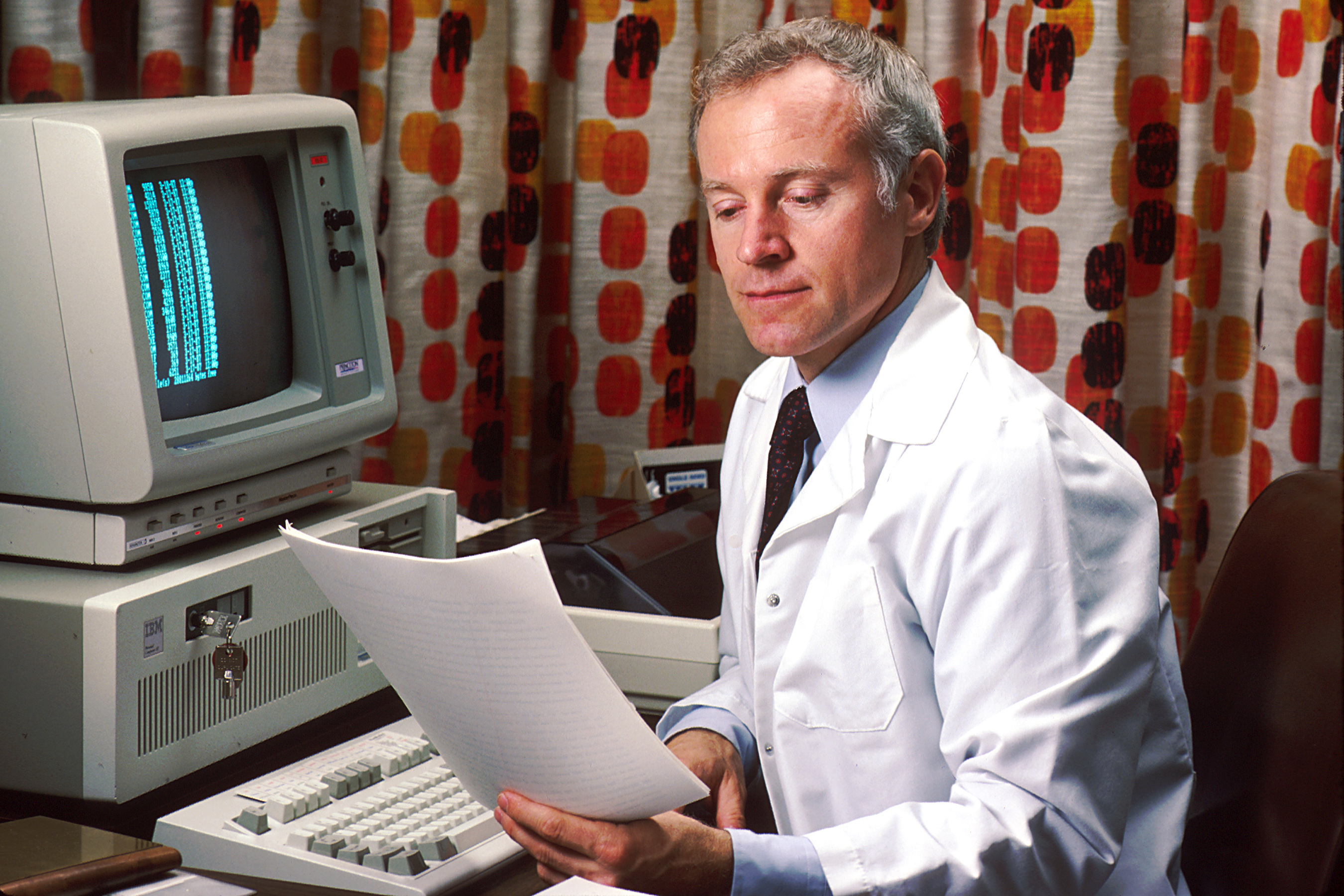 OK, the curtains give it away – this isn’t recent. Apparently though, the user experience is still much the same

Especially since companies pay those users salary for every hour spent dicking around, reading manuals and swearing profusely – not to mention also paying for the army of consultants and the hours of certification needed because the use is super-anti-intuitive. This is a great model for the provider, obviously, but why does the professional sector accept this?

Imagine, if you will, a piece of e-journal software that lived up to the current status of tech: – the patient arrives and says “I’m going to [country], do I need shots?” and the doctor/nurse types in your SSN and “[name of country]”, and the system figures out by itself “oh, that dude is probably going to [country] (because why else would a doctor type those criteria otherwise?), let me just check the medical database for necessary inoculations, and then check that against his journal and see if he needs any of them”.

It then provides the doc/nurse with that info – “your patient needs so-and-so shots” – accompanied by a button that says “treatment completed?” which she clicks when she’s jabbed me with the needles. The system then says “if your patient receives a Hep-A booster within six months he (it knows my gender from the SSN) will be inoculated for the next 25 years – would you like to set up an appointment?” – she turns to me and gets my consent, clicks “yes, please”, and the system sets a date in her calender at the appropriate time.

It also schedules an email reminder for me a month in advance, including perhaps a little nudge: “did you know that the average your-age-year-old travels so-and-so many times in this period of their life – you’ll save this much money by getting your immunity boosted, compared with getting a new shot for each trip you will probably take”. The email contains an event for importing into my calender, of course, and a link for me to confirm that I still want the treatment.

All of this happens with the speeds of a Google seach, and at no point does the doc/nurse have to worry about how the info is entered into the journal because this is the age of big data when we can keep everything. When she clicks “treatment complete” everything that went on – including medication batches etc. based on her delivery journals – is entered into the e-journal, for ever accessible and available to search algorithms. Hell, the system could record audio from the consultation and keep that, too, with the patient’s permission.

All of this is so possible that small, or even one-man-army, app developers can harness these kinds of power already – and yet, at the professional level, which for almost everything means “the *really* good stuff”, value-creating user experiences sputter along if they exist at all.

Isn’t it time, big businesses & large administrative entities (which often overlap, of course), that you found out which generation you should belong to – especially since it would create added value for everyone, including yourselves…?

That advertising thing In a market of customers