I’d be surprised if anyone remembers but waaaay back in the end of ’06 and the early part of this year, there was a buzz goin’ on about something called “Second Life”. Everybody who thought they were anybody had to be there and pretend to take it seriously.

JWcph was there too, actually I had opened an account a few months before the full hype wave hit (because JWcph is always in front, of course) – only, we never created a presence, nor did we when .noia. was born (it’s still a baby though, and as such the other partners and I hold it close – don’t worry, you’ll know more about it soon…). We paid attention, and certainly yours truly spent unhealthy amounts of time there but we never built anything for ourselves, because we didn’t care to rush for the buzz.
As with everything else, we want to deal in knowledge, not know-it-all’ledge.

Now everyone else is getting out again, after (excuse me) half-assed attempts that never really took the concept seriously – .noia. and JWcph, well, we’re still there, and now we even have our first wee location, courtesy of arcspace:
“under the clock” – meet .noia. (this is a so-called “slurl”, you need SL to use it)

Second Life is not great – not even close.
But it is a very serious attempt at pointing towards a possbile future for online interaction, and so far the only such thing in the world, as all the others simply are not created by or for the users to the same degree.
(this is subject to fierce discussion but this is my statement, and I’m sticking to it)

That’s why I still hang out there from time to time, and why I still wonder where it might go… 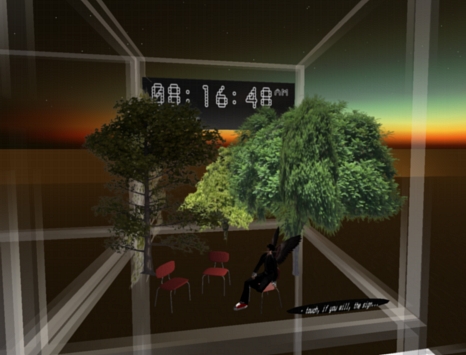 – that’s me, resting my black wings under the clock, waiting for my date: The future…
of course, everything in the cube was built and scripted by us, from wind sensitive trees to the custom sitting pose

Speak of the…. iPhone Challenge? – don’t go there