Eulogy for a stranger…

Strictly speaking I have no business talking about this but I feel the need to:

Yesterday, june 24th, the world became a little bit smaller and a little bit uglier – in Jamaica, the Powers That Be reached out and took away the lovely and talented Natasja Saad. 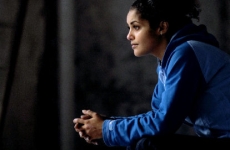 I won’t climb on the pityful bandwaggon of claiming fan-ship now she is no longer here – Natasja’s thick, sweet, powerful voice melted through my ears (and any low moods I might have felt at the time) when, by chance, I heard her music, that’s all.

But she had something about her, something that made me feel like someone was gently and playfully slapping my face in time with the Jamaican beats, while wearing an ironic yet absolutely friendly smile – something that, as naive as this may sound, felt Bona Fide and true.

Maybe that is why I feel so profoundly saddened by the death of someone I’ve never met, because she just isn’t out there, in the world somewhere, anymore.

My heart goes out to the people to whom Natasja meant so much more than she ever could to her audience – her family, her friends.

The first date Speak of the…. iPhone