Do you have a stereo? You know, one of those classic ones with an amp, record player, CD player, radio, speakers, proudly perched and flaunting all of its buttons and dials on a shelf, or even a dedicated piece of stereo furniture? Or did you take your music listening into the 21st century and find a digital solution – do you put your smartphone in a thing, or put a cable in it, do you stream sound from your laptop?

Music has become digital. The digital world of music is amazing – but like anything involving computers it can get confusing, too. I’ve touched upon the challenges of finding your way ’round the music itself via various streaming services but today it’s going to be about getting your beatz – and other digital sound – out of your home speakers.

For the past few weeks I’ve had a visitor, a Hall 2x8W from Hall Audio, and I’ve been testing it from a perspective of user practicality. 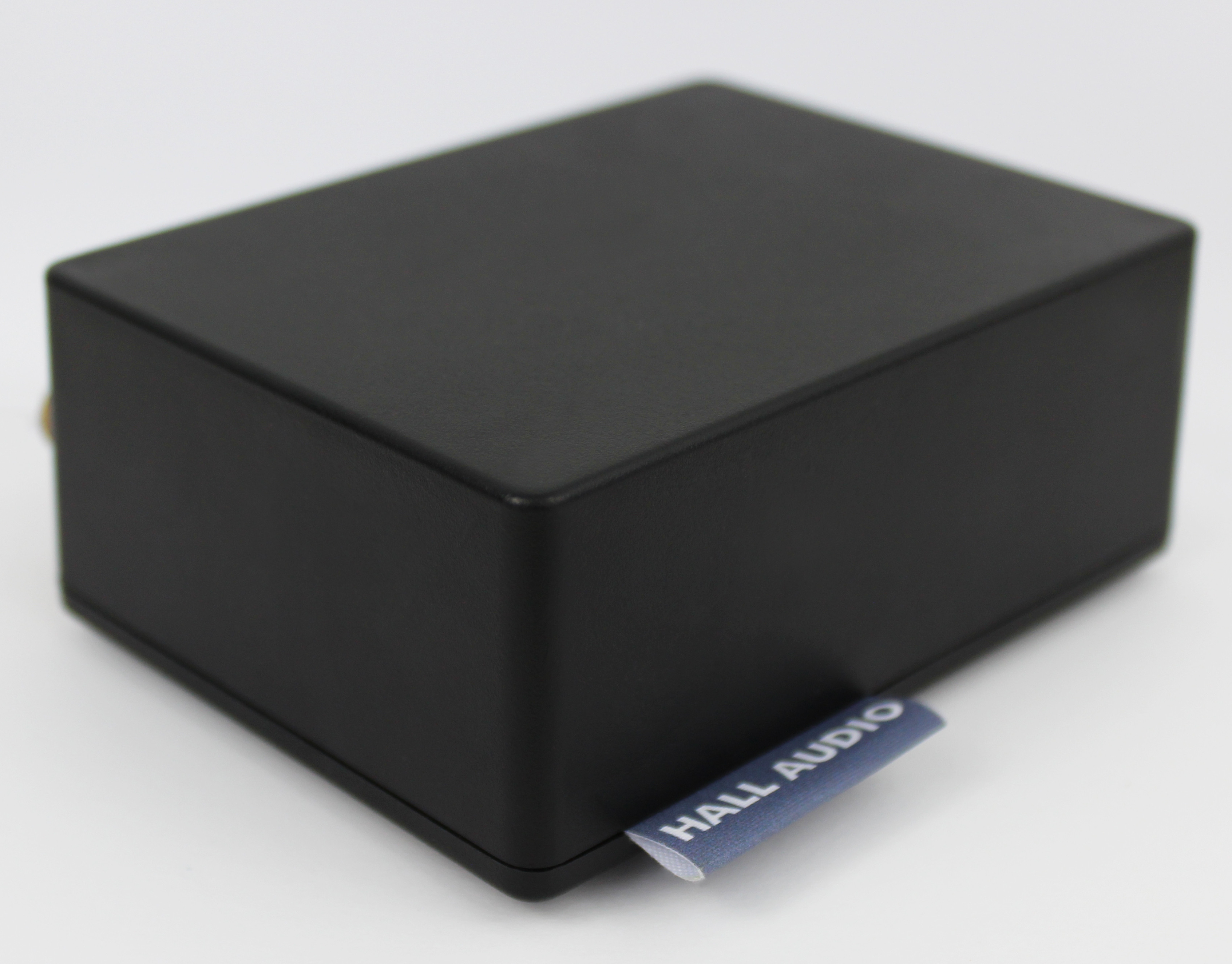 I am therefore going to go lightly over the part where I tell you it sounds fine and effortlessly drives my somewhat oversized Avance Omega 39 speakers, and go directly to the user experience.

Technically speaking it’s an amplifier, of course, but it’s described by Hall as “a solution to make your speakers wireless”. Upon unpacking it certainly doesn’t look like what most people would consider an amplifier – it’s the size of a tub of ham salad (by danish standards, anyway), and it has only a single “button” plus a few combo banana jack/cable terminals.

The “wireless solution” is that 2X8W is bluetooth enabled. I admit my expectations weren’t super-high – there’s always something with pairing, networking and such. In a positive turn, though, I didn’t have to worry. Less than 5 minutes after taking an X-acto to the box, music from my Android phone was emanating from the speakers. 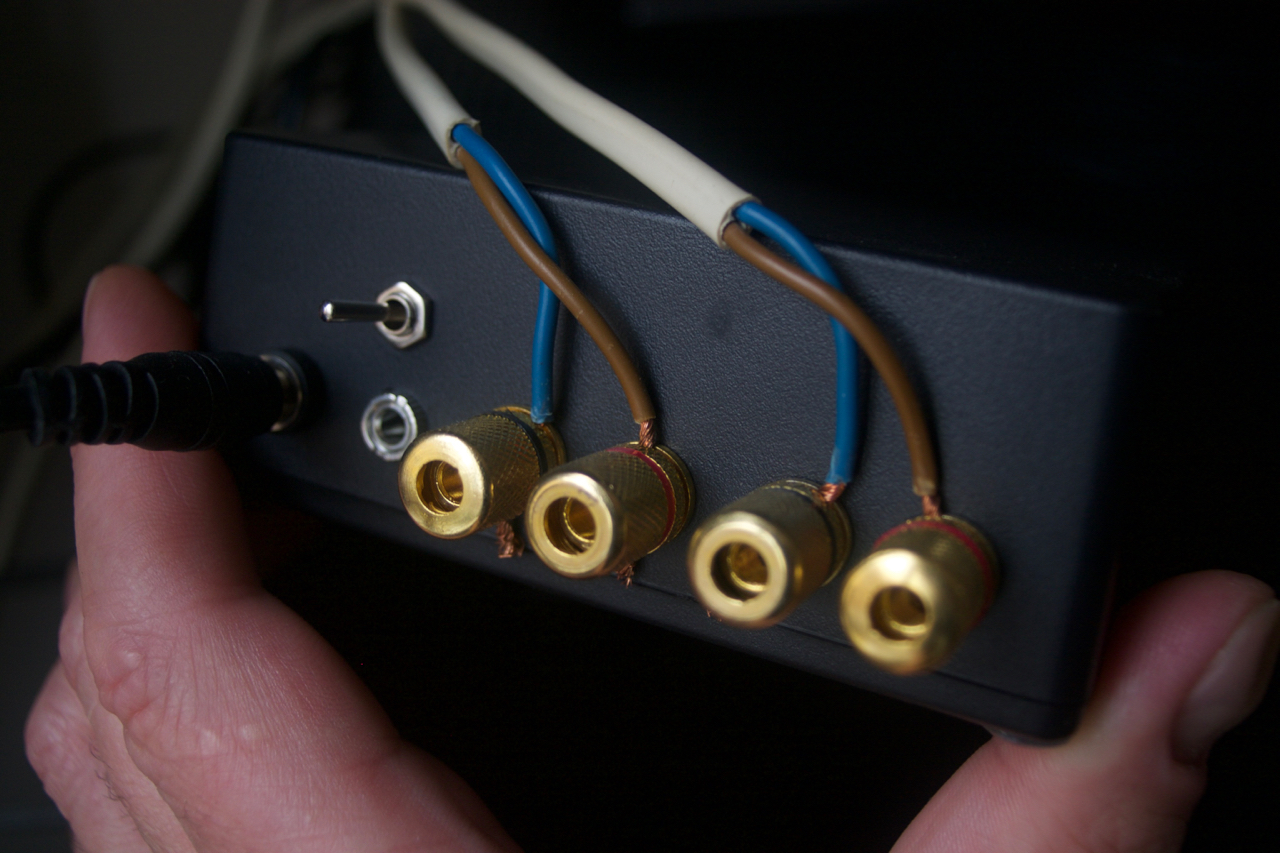 The “button” turned out to be a toggle between bluetooth and the built-in line-in input (a 3.5mm jack, like on a pair of headphones) – in other words, all sound control happens from the streaming unit. You turn the volume up and down there, and if you want to fiddle with the sound quality you have to install an equalizer app on it. Basically there isn’t any reason for the little box to be out in view, further underscoring the experience of simply having your speakers wirelessly connected directly to your phone, tablet or laptop.

But I said “and other digital sound” before, and this was one thing I was very curious to test: I often stream video from my laptop – so how about switching sound source to the speakers? Again I was kinda surprised; it’s completely seamless. 2X8W automatically switches.

That is, if I’m playing music from my phone and start a video on the laptop, the music keeps going, of course – but if I pause the music and start the video, the video sound simply takes over. No manual switching or opening bluetooth. Neat.

There is, of course, a few small issues, the worst of which probably being that there are no markings to tell you if the lone switch is in bluetooth or line-in position. If, for whatever reason, no sound comes out, this is going to be a point of irritation – is it set right or not? Also, Hall decided to put the switch on the same side of the box as the cables, for no user-relevant reason. Sure, there isn’t a real “front” or “back” to this thing but if, say, it’s sitting on a shelf, the cables are probably going to be facing the wall, and then so will the switch. Then there’s the auditory alerts from the system – most reasonably savvy people can probably figure out what they mean but it wouldn’t harm to mention them in the (quite brief and precise) manual, á la “when you hear a beep it means the connection is established” etc.

I also wouldn’t mind if Hall would recommend their choice of equalizer app – the option of using one is mentioned on their website but for mortal man that stuff’s a jungle. Perhaps they didn’t feel like endorsing any one choice but it would still be a significant value for many users.

And then there’s the giant power supply with its giant, round plug. The Power block is actually just as big as the unit itself. Undoubtedly this is a standard item, chosen to keep the price at a very respectable DKK 749,- but a smaller plug would still be nice.

Bottom line: The Hall 2X8W is quite user friendly. It does exactly what’s advertised: Makes your speakers wireless – and it’s totally practical that source switching is so simple. If all you want is to have your phone or laptop music, your Netflix sound etc. come out your speakers with minimum hassle, you could do a lot worse than this little unit.

What is “pull” marketing Customer loyalty is good business